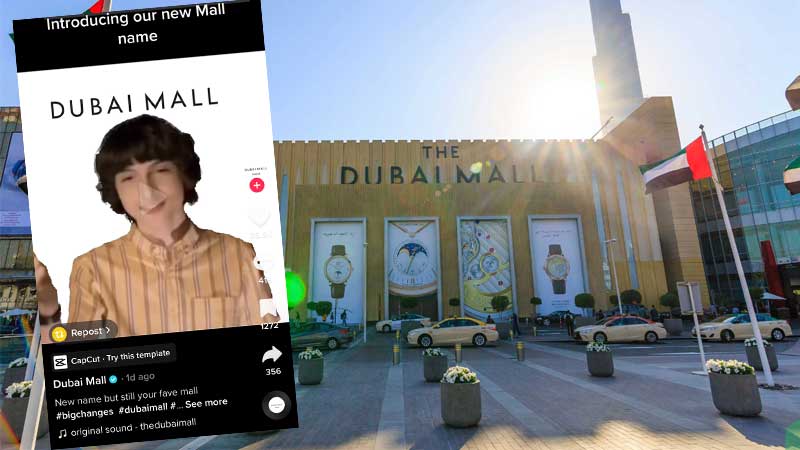 The Dubai Mall announced its name change in a TikTok video (inset).

A day after The Dubai Mall announced its new name via a TikTok video, the iconic mall has reportedly been flooded with phone calls over the “unofficial announcement”.

“We have been getting a huge volume of calls from customers asking if the new name is true, and we have raised it to higher management but we have been told it’s still unofficial,” a customer service representative of The Dubai Mall told Expatmedia.net on Monday (January 23). Shortly after the call, the TikTok video was deleted at around 5pm.

The since-deleted video featured Stranger Things star Finn Wolfhard snapping his fingers, and the word “The” vanishing from The Dubai Mall logo in the background.

According to the TikTok announcement, The Dubai Mall was to be simply called Dubai Mall, dropping “The” from its original name. “New name but still your fave mall,” according to The Dubai Mall on social media. The mall also changed TikTok name to just “Dubai Mall”. However, the mall’s website still uses The Dubai Mall, and even its call center rings with The Dubai Mall greeting as of 4:30pm on Monday. It’s exterior signage also remained The Dubai Mall.

When asked, a customer service representative told Expatmedia.net that this was because the announcement on TikTok was still “unofficial” and that there was no directive from higher management for a change in branding. “We are waiting if there will be an an official announcement, but so far higher management has not made any,” he said.

Meanwhile, the social media announcement has sparked mixed reactions from people, with many saying they did not realise there was a “The” in the mall’s name.

The Dubai Mall is located in Downtown Dubai and has more than 1,200 retail outlets. It is one of the most visited shopping and lifestyle destinations in Dubai. ICA/Expat Media