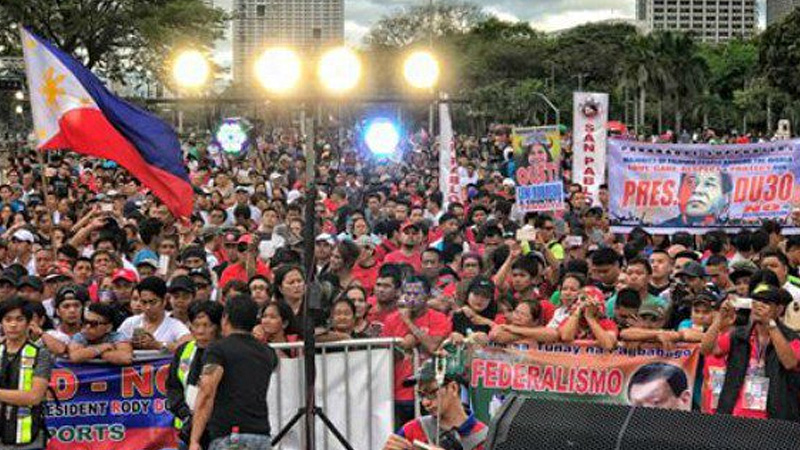 A rally in support of Philippine President Rodrigo Duterte in Rizal Park, Philippines.

President distances self from rally; says he’s ‘beyond politics’ already

MANILA – Thousands of supporters of Philippine President Rodrigo Duterte gathered at the Rizal Park in Manila on Sunday, calling for the ouster or resignation of Vice President Maria Leonor Robredo.

They criticized Robredo for shaming the country and the administration via a video message to the UN Commission on Narcotic Drugs where she criticized the state’s bloody campaign against illegal drugs codenamed “Oplan Tokhang (Double Barrel).


Robredo is facing an impeachment complaint filed by lawyer Oliver Lozano and brodcaster Melchor Alvarez at the office of House Speaker Pantaleon Alvarez.

The complaint was not accepted by the House secretary because it was not endorsed by a congressman as required by Congress.

Duterte refused to comment about the rally saying he is “above and beyond politics already”.

“No (I don’t support the removal of Robredo). I am not anymore a politician. Why should I waste time about politics?” he told reporters during a visit of Cagayan de Oro City on Sunday.

The rally was spearheaded by singer Jimmy Bondoc, who is vice president for entertainment of the Philippine Amusement and Gaming Corporation (PAGCOR), and entertainer-blogger Mocha Uson, who is a member of the Movie and Television Review and Classification Board (MTRCB).

They said no politician funded the rally and they held the activity on their own in support of Duterte.

Barry Gutierrez, legal adviser of Robredo, shrugged off the rally and said Duterte and Robredo “respect each other’s work”.

Speaking in Filipino, Gutierrez said: “it is clear in their last meeting that both the President and Vice President are focused on their respective jobs. They respect each other’s electoral mandate.” GAC/Expat Media