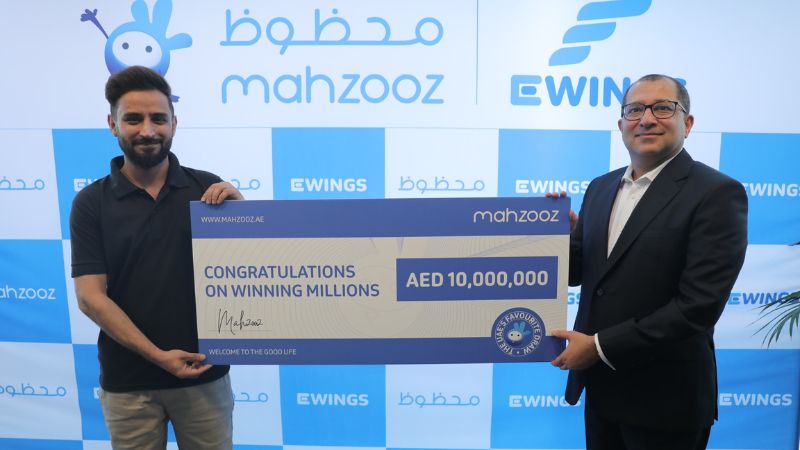 Saad (left) with Farid Samji, CEO of EWINGS, the operator of Mahzooz.

An Abu Dhabi-based machine mechanic became the 29th multi-millionaire in Mahzooz after winning a whopping Dh10 million in the latest draw.

Saad, a 32-year-old Pakistani expat who has been living in the UAE for the past nine years, is the second person from Pakistan who has won the grand prize in the draw. The first Mahzooz top prize of Dh50 million went to Pakistani expat Junaid last year.

Speaking to Expatmedia.net on Thursday (October 6), Saad recalled how he felt as soon as he found out he won the jackpot. “I was shaking in the car,” he said.

Saad was going for a night drive with his cousin and friends when he thought of logging in to his Mahzooz account to watch the draw. He was shocked to learn he had won Dh10 million. He couldn’t believe his luck, and asked his friends to check the winning numbers again. When they confirmed that he won, he then asked his cousin to stop the car by the roadside where they “jumped, shouted [for joy] and were very happy”.

“This unexpected gift came to me just when I needed it most,” said Saad, who is a frequent Mahzooz participant.

Saad said he chose the winning numbers, 5, 14, 18, 24, and 35 randomly and has asked his wife to choose another set of five digits as part of Mahzooz’s new limited-time offer, which offers participants an additional complimentary entry into the weekly draw.

Although Saad’s wife carefully picked her line, Saad’s set of numbers made him a millionaire in the end.

Winning Dh10 million came as financial support for Saad, who earns Dh2,000 per month working as a machine mechanic and operator at an aluminum factory.

Despite being married for four years, Saad has not been able to bring his wife to the UAE. Currently, Saad lives in a shared accommodation provided by his employer. “With my winnings, I plan to bring my family to the UAE where I also want to start my own business here in UAE and also in Pakistan,” he shared to Expatmedia.net.

He will also share his winnings with his mother and sister. “I am my family’s only breadwinner, and I am responsible for both my ailing mother and sister, who lost her husband to a brain tumor last year, and her child,” he said.

Saad said he will quit his job and go into business as soon as he can. He plans to donate a portion of the win to the Pakistan flood victims, and would also be sponsoring the meals of his neighbourhood cricket team called Star Players.

During a press conference held on Thursday (October 6) to announce the latest winner, Farid Samji, CEO of EWINGS, the operator of Mahzooz, said: “We are delighted to see that we have another deserving grand prize winner from Pakistan, and we hope that Mahzooz can give all those who have big dreams the good life they deserve.”

He added: “Pakistani nationals make up our third largest customer base. Over 190 were among the second prize winners of Dh1 million, and 12 won the raffle draw of Dh100,000 each. The 96th weekly live Mahzooz draw also saw 110 winners share the second prize of Dh1 million and 4,102 winners bag the third prize of Dh350 each. Additionally, three winners took home Dh300,000 in the raffle draw, which features three guaranteed winners every week. The total prize money won in the 96th draw was Dh12,735,700.”

Since it launched in 2020, Mahzooz has made 29 multi-millionaires and has given away close to Dh300 million in prize money.

The limited-time offer is still running, enabling participants to avail of a complementary entry into the draw upon purchasing one bottle of water for Dh35. With the additional access, participants get to pick an additional set of 5 numbers, thus, doubling their chances of winning.  ICA/ Expat Media