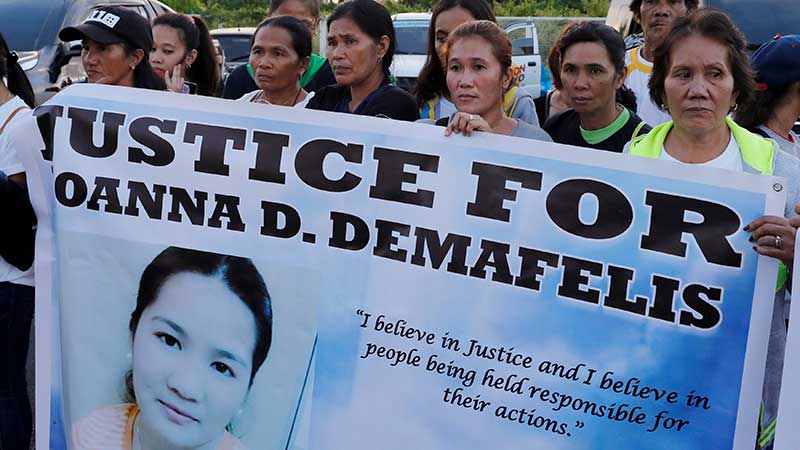 Joanna Demafelis' body was found in a freezer in a Kuwait apartment in 2018.

MANILA – The Syrian District Criminal Court has found the Syrian employer of a Filipina stuffed in a freezer in their Kuwait apartment guilty of murder.

“We welcome that news which means that justice has been meted to the culprits, to the killers,” Philippine Presidential Spokesperson Salvador Panelo told media on Tuesday (September 10).

Mouna Ali Hassoun is expected to face a prison term of eight to 15 years. Her husband, Lebanese national Nader Essam Assaf, was earlier charged with murder in Lebanon.

The couple had fled Kuwait but was arrested last year in the Syrian capital Damascus following an Interpol manhunt. Syrian authorities handed Assaf over to Lebanese authorities, while Hassoun remained in custody in Damascus.

The couple was earlier tried in absentia in Kuwait and given a death sentence for the murder of Joanna Demafelis, whose body was found in a freezer in the couple’s apartment in Kuwait in 2018.

The discovery of the Filipina housemaid’s body prompted Philippine President Rodrigo Duterte to temporarily stop the deployment of Filipino workers to Kuwait.

It also prompted a Philippine-Kuwait agreement on the protection of Filipino workers in the Gulf state, requiring weekly day off, seven hours of sleep and other benefits for housemaids.

Meanwhile, the Philippine Department of Foreign Affairs said it will continue to provide assistance to the family of Demafelis until justice is served. GAD/Expat Media