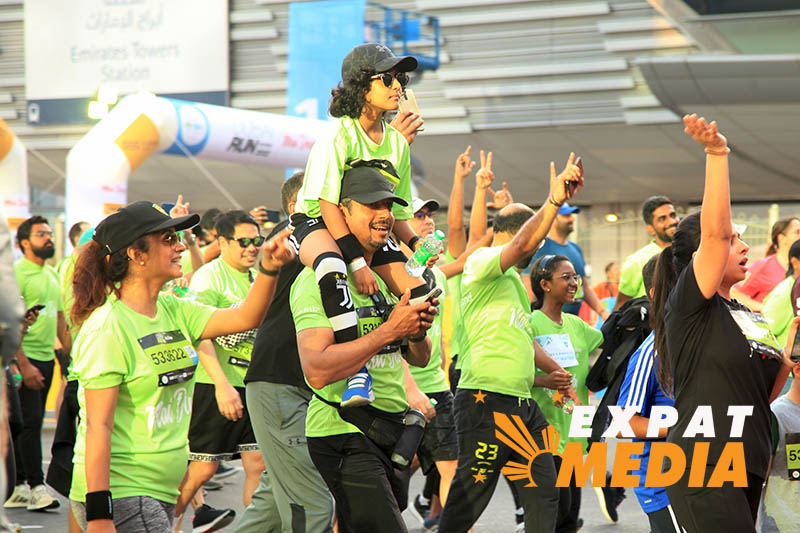 Dubai Run in pictures: Have you been spotted?

Sheikh Zayed Road turned into a giant running track on Sunday as more than 193,000 people took over the major highway for the epic Dubai Run.

The highway was closed to traffic from 4am to 10am to make way for thousands of runners, walkers and joggers of all ages. Many people came with their toddlers in tow. Check out these two boss babies twinning with their legs crossed. The free run definitely attracted everyone, young and old. There was even a 70-year-old participant who told Expatmedia.net that he enjoyed his first Dubai Run with family! Then there was this guy who wowed us with his creative social statement on the highway. The biggest head turner, of course, was Sheikh Hamdan, who was spotted joining the run. The Dubai Run is part of his Dubai Fitness Challenge, a 30-day fitness initiative aimed at making Dubai residents more active. The Dubai Run gave people a once-in-a-year chance to literally step on Sheikh Zayed Road, which is normally busy with thousands of cars plying down the road on a daily basis. On Sunday, the chance to get on the car-free highway for a few hours was enough to make everyone jump for joy! There were a lot of picture-perfect moments as people whipped out their mobile phones and cameras to immortalize the epic event in a photo. Who could resist a selfie on Sheikh Zayed Road, against the awesome backdrop of the Museum of the Future? People also took the chance to show just how much they love Dubai and the UAE at the iconic free run, some carried UAE flags, while others got creative with balloons! Mascots showed up to help everyone have an enjoyable Dubai Run, which featured a 5km run through Dubai Mall, Dubai Opera and the Burj Khalifa, and a longer 10km run that took them through Sheikh Zayed Road down the Dubai Canal, before making a turn back to DIFC. The Dubai Run was led by an amazing group of marshalls in orange who showed up really early to make sure everyone knows which way to go. More pictures: Check out if you have been spotted