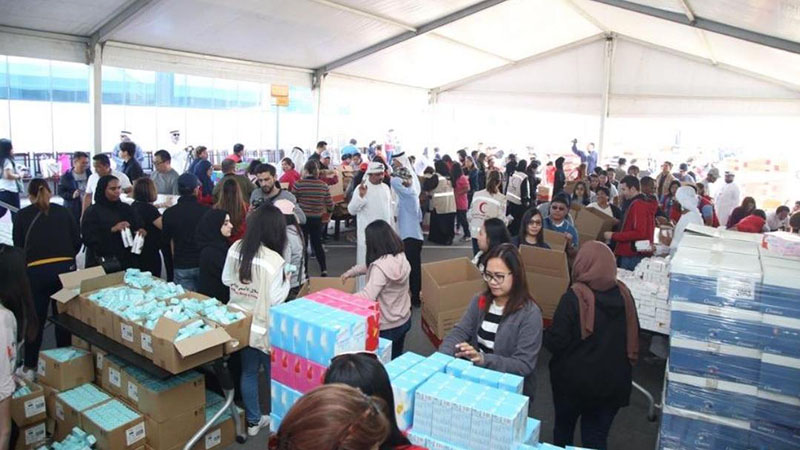 Volunteers help pack aid into hundreds of boxes at the Emirates Red Crescent warehouse in Dubai.

DUBAI – The ruler of Dubai praised Filipino and Emirati volunteers who trooped to the Emirates Red Crescent (ERC) headquarters in Dubai to prepare boxes of donations to victims of the Taal Volcano eruption in the Philippines.

“Today, we saw humanity and tolerance unfold through the Emirates Red Crescent’s campaign that brought our citizens together with Filipino residents to provide aid to families affected by the Taal volcano in the Philippines,” Sheikh Mohammed bin Rashid, Vice President and Ruler of Dubai, tweeted on Saturday.

Volunteers on Saturday packed boxes of donated essentials to be shipped to families affected by the volcano eruption and the ensuing ashfall.

Saturday’s campaign was organized in partnership of the Philippine Embassy under Philippine Ambassador to the UAE Hjayceelyn Quintana, and the Emirates Red Crescent, under Secretart-General Mohammed Ateeq Al Falahi.

ERC branches around the UAE had been used as drop-off points for public donations for Taal Volcano victims.

“Our hearts go out to the people of Philippines after the eruption of the Taal volcano,” Sheikh Mohammed Bin Zayed said on Twitter. “We pray that these tough times are over with the least losses. The UAE stands in solidarity with the Philippines in these difficult times and is ready to provide all support and assistance.”

Thousands of people have been displaced by Taal Volcano’s eruption on January 12, with heavy ashfall burying homes and destroying crops in at least four provinces.

The National Disaster Risk Response and Management Council (NDRRMC) said that 376,000 people in the provinces of Batangas, Quezon, Laguna and Cavite were affected by Taal’s unrest, with 135,365 people taking shelter in 497 evacuation centers and 168,569 others “served outside evacuation centers.”

Two weeks into Taal Volcano’s fury, the National Disaster Risk Response and Management Council remained on high alert, although state volcanologists on Sunday lowered the alert level from 4 to 3, meaning that there is “decreased tendency towards hazardous eruption”.