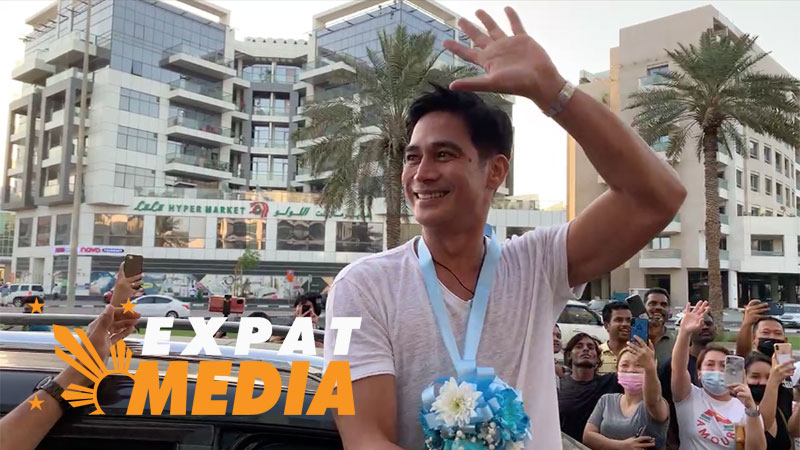 Piolo Pascual greets fans in front of Palengke supermarket in Dubai on June 11, 2022.

Filipino heartthrob Piolo Pascual made a brief meet and greet with fans in front of Palengke supermarket in Dubai’s Bur Dubai area on Saturday (June 11).

Wearing a white V-neck tshirt and dark jeans, Piolo was not able to step down of the black Mercedes-Benz SUV with a Dubai plate number that drove him to the venue. However, the actor rolled down the window to wave to excited fans who have gathered to see him.

During the scheduled stop, Piolo briefly stepped down to pose with executives of Palengke for a quick photo opportunity with Expatmedia.net on the side road. Piolo was supposed to go into Palengke for a brief meet and greet, but the massive crowd made it impossible for him to go inside the Filipino specialty store. Piolo arrived in Dubai on Friday ahead of his scheduled performance on June 12 for the Philippine Independence Day celebration at Dubai World Trade Center.

However, the June 12 event has been postponed to June 26, but will still be held at Dubai World Trade Center. Organisers have not yet confirmed if Piolo will still be part of the celebrity line-up on June 26. Emirati singer Alira is confirmed to perform. The UAE hitmaker is expected to sing his hit song Take Flight, as well as surprise Filipino fans with another flawless rendition of a Filipino song. ICA/Expat Media