Museum of the Future to open soon, Sheikh Mohammed reveals 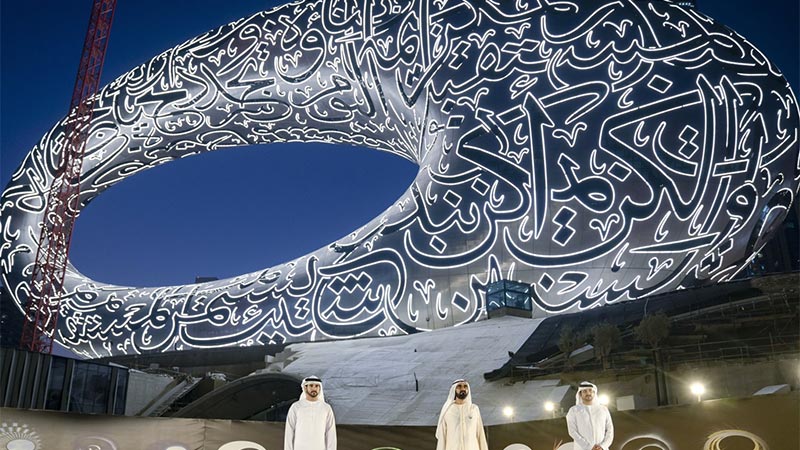 The Museum of the Future along Sheikh Zayed Road, Dubai.

Museum of the Future to open soon, Sheikh Mohammed reveals

Sheikh Mohammed did not give an exact date for the grand opening of Dubai’s most futuristic museum, but described it as an “international scientific landmark”.

He made the remark on January 4 at the launch of a Dh100 million project to search for 1,000 Arab “geniuses” in physics, mathematics, research, economics, programming and other fields.

The Dubai Ruler said the Museum of the Future would serve as a hub for these geniuses, whom he said would “change our Arab reality for the better”.

Construction of the Museum of the Future began in June, 2016. The most interesting part of the museum is its stainless-steel façade that extends over 17,000sqm.

It is covered in Arabic calligraphy, designed by Emirati artist Mattar bin Lahej, which glows at night via LED lights.

Even though it has not officially opened to the public, the Musuem of the Future has already made it to the list of 14 most beautiful museums in the world.

The list, published by National Geographic, put Dubai’s Museum of the Future as the fifth most beautiful museum in the world. China’s Shanghai Museum of Astronomy, which mimics stars and planets, topped the list.

Spanning an area of 30,000 square metres, the seven-storey pillarless structure of the Dubai Museum stands at 77 metres high.

The museum will hold exhibits on design and technology innovations. It is set to become a new global landmark once complete.

“The emirate’s ambitions are reflected in an engineering miracle like Dubai’s Museum of the Future that has been globally recognised as the world’s most beautiful museums even before its completion,” said Mohammad Al Gergawi, Vice Chairman of the Board of Trustees and Managing Director of the Dubai Future Foundation.

“The museum presents the UAE’s and the world’s gateway to the future with its design and latest technologies… Once complete, the museum will give visitors a glimpse of the future,” Al Gergawi added.

Dubai’s Museum of the Future is powered by 4,000 megawatts of solar energy produced by a station connected to the building.

The park surrounding the museum contains 80 species of plants, equipped with a state-of-the-art intelligent and automatic irrigation system. ICA/Expat Media