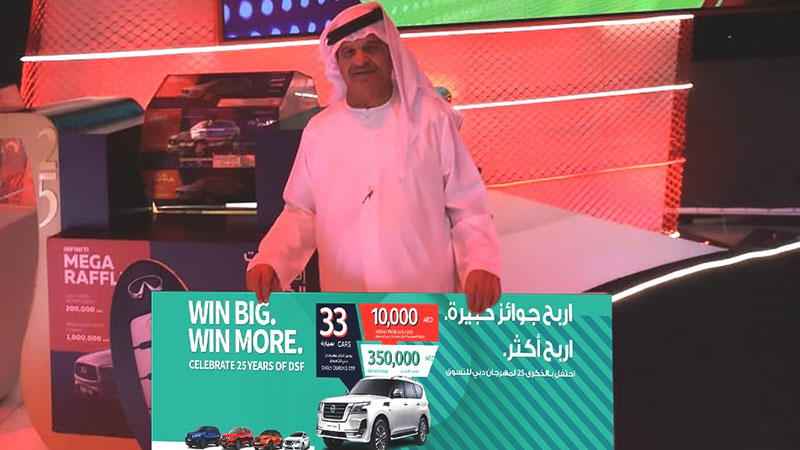 Ahmed Al Ali receives the DSF prize on behalf of his granddaughter.

DUBAI – An eight-year old girl, Fatima, has won a Nissan Sentra in the Nissan Grand Raffle, part of the Dubai Shopping Festival (DSF), thanks to her doting 67-year old grandfather, who filled in raffle coupons with the names of his granddaughters.

“I was changing my car oil at the petrol station near City Centre Mirdif and got several raffles coupons for a Nissan car, not for myself, but for my loving grandchildren. I put down each of their names, but I knew if I won, the prize would go to my sweet Fatima,” said the grandfather, Ahmed Al Ali.

“I don’t have favourites among my grandchildren, and I love them all, but Fatima is the sweetest child, and also she is feeling unwell now. She truly deserves this win,” he continued.

“I received a call on 8 January and as luck would have it, Fatima’s name won. I was so excited to break the news to my son about the win. We have decided that it would be best to sell the car and put the funds into a bank account to secure Fatima’s future,” he said.

The Nissan Grand Raffle will give away one of five cars every day. The raffle can be entered upon a purchase of items worth a minimum of Dh25 from any EPCO or ENOC station. A total of 37 cars will be given away, plus a grand prize of Dh350,000.