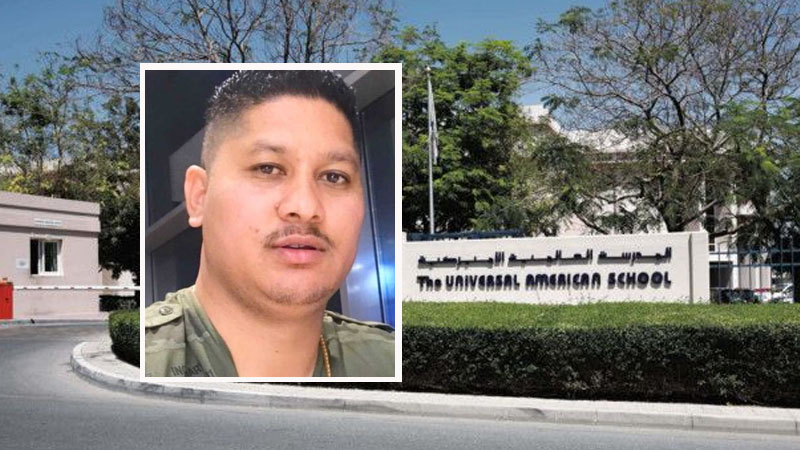 Lil Bahador Pariyar (inset) was hit by a car near the school gate on Monday.

DUBAI – A school security guard died from injuries after he was hit by a vehicle near the gate of a school in Dubai, according to police and school officials.

The victim, Lil Bahador Pariyar, was declared dead on arrival at the hospital where he was admitted on Monday. It is believed he died at the scene of the incident.

Universal American School (UAS) in Festival City, in a statement, said: “An unfortunate incident took place outside the school gates of UAS on Monday afternoon which sadly resulted in the passing of one of our security guards. Our thoughts and prayers are with the family of the security guard and the rest of the security team at this difficult time and we are offering our full support.”

Witnesses said a woman who was coming to pick up her two children from school drove up the curb and hit the stop sign before running into the security guard just outside the gate.

Police said the woman, who was with her husband, accidentally stepped on her Land Rover’s accelerator while trying to make a U-turn, police said.

Witnesses said that the security guard, who was standing in front of a stop sign near the school gate, was knocked to the ground along with the stop sign after being hit by the woman’s vehicle.

Police are still investigating the incident.

Pariyar was from Nepal’s city of Butwal. He had worked in the school for six years and was a beloved employee. Students and teachers alike described him as a happy and helpful person.

On Wednesday, mourners left flowers, notes and candles at the school gate at UAS in memory of Pariyar. ICA/Expat Media