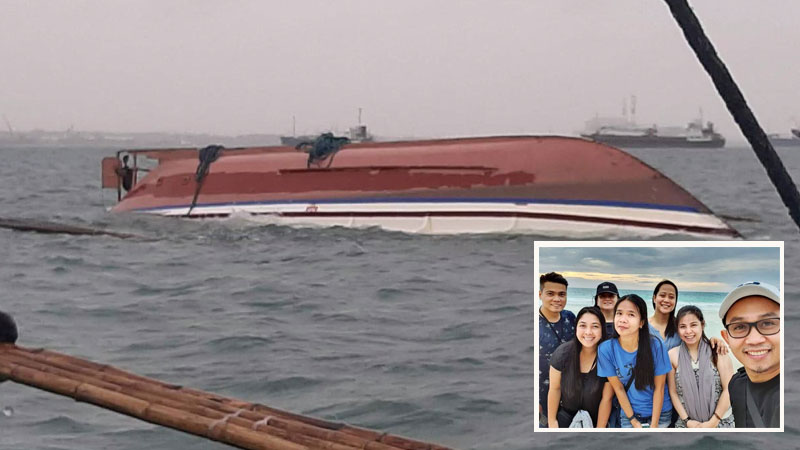 The group of UAE-based teachers (inset) were passengers of a ferry that capsized off the waters of Iloilo City, Philippines on August 3, 2019.

DUBAI – A UAE-based teacher remained in intensive care after surviving a ferry accident in the Philippines that killed three other Filipino teachers from Al Ain, according to reports on Monday (August 5).

Jeanette Montemayor was among eight UAE-based Overseas Filipino Workers (OFWs) on a beach holiday in their home country when their ferry capsized off the waters of Iloilo City on Saturday.

Montemayor was hauled onto safety by fellow teacher and survivor, Mark Angelo Subaldo, a teacher in the UAE for the last nine years, who said he escaped from the capsized boat by removing his life jacket and swimming into open water.

Three other teachers, however, died in the incident: Andrew Valenzuela, 39, and Eden Perales, 37, of Al Ittihad National Private School in Al Ain; and Jaquelyn Alferez, 38, from another school.

The bodies of Alferez and Perales were discovered washed up on an island on Sunday morning.
“It is very traumatic for all of us,” Subaldo said, adding that funeral arrangements are being made to send the bodies to their families.

Subaldo said that the Philippine coastguard “should be held responsible” for the accident, claiming that their ferry was allowed to depart despite two other ferries capsizing earlier in the day due to strong winds and waves.

“My personal point of view is that the Philippine coastguard should be held responsible. Until now, no one is responding from their side. We want them to explain to the bereaved families what happened, but nothing has happened. During the day of the tragedy, the moment that the coastguard said that it is safe to cross from Buenavista, Guimaras to Iloilo, everyone started rushing for the ferries because they wanted to leave the island,” Subaldo said, calling for an investigation into the incident.

Rescuers were able to recover more bodies in rough seas, bringing the death toll to 31 with three missing, according to the coast guard.

Coast guard spokesman Armand Balilo said the dead were mostly passengers of two ferries that capsized due to powerful winds and waves off Guimaras and Iloilo provinces.

Voltaire Vizconze, a colleague of the Al Ain teachers killed in the incident, is “still in shock”. He said it was the first time that the group spent the summer holidays together. Vizconze said the group planned to go to the island of Boracay for a vacation. “Praise God for sparing me, my wife and baby, as we decided not to join their Boracay trip,” he said.

“They were hardworking and energetic, loved by their students,” he said. LKA/ICA/Expat Media