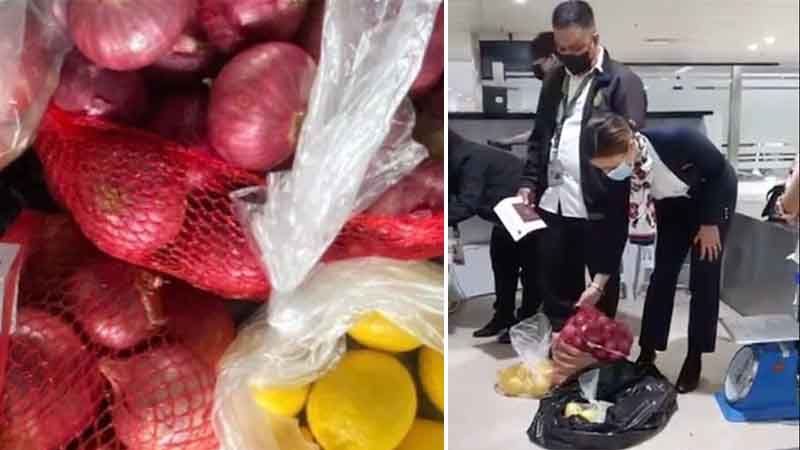 The bags of onions and lemons confiscated from 10 Philippine Airlines cabin crew members.

Philippine Airlines has launched its own investigation after 10 of its Filipino cabin crew members were accused of smuggling 27kg of onions and other fruits from Dubai and Riyadh.

“Philippine Airlines does not condone any violation of customs regulations. We will impose the appropriate disciplinary sanctions subject to the results of the investigations,” said Philippine Airlines spokesperson Ma. Cielo Villaluna.

“We are fully cooperating with the customs authorities on this matter. We reiterate to all our personnel the need to adhere strictly to customs regulations at all times,” Villaluna said.

Ten Philippine Airlines cabin crew members were caught carrying 27kg of onions, 10.5kg of lemons and 1kg of strawberries and blueberries in their suitcases as they arrived on two separate flights from Dubai and Riyadh on January 10.

According to the Bureau of Customs, the crew did not declare the items and did not have any import permit for the goods when they arrived at Terminal 1 at the international airport in Manila.

The items were confiscated and Philippine authorities are reportedly filing smuggling charges against the 10 Filipino cabin crew members.

The confiscated items have been handed over to the Bureau of Plant Quarantine for immediate destruction.

A government official has stressed that carrying onions or other agricultural items in one’s luggage is classified as importation, even if the quantities are for personal consumption.

Following a shortage of onions, prices of the staple cooking ingredient have skyrocketed in the Philippines, costing more than P600 pesos per kilo (Dh40) whereas in the UAE, a kilo of onions on sale cost around Dh2. ICA/Expat Media