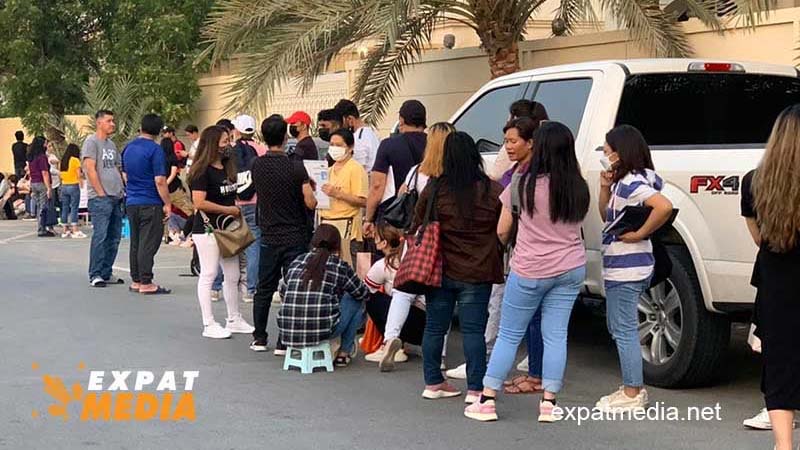 A long queue of people gather outside the Philippine Overseas Labor Office in Dubai on April 29, 2022.

DUBAI – Filipinos have expressed frustration at “horrific queues” outside the Philippine Overseas Labor Office (POLO Dubai) in recent days as a growing number of desperate expats resulted to overnight vigils to secure their spot for service at the office.

Filipinos said this has become a common sight there recently amid a surge in applications for employment contract verification; a prerequisite to getting an Overseas Employment Contract (OEC) that Overseas Filipino Workers (OFWs) need to return to their workplace abroad after visiting the Philippines.

When Expatmedia.net visited POLO Dubai at 5:30am on Friday (April 29), there were scores of people waiting in a long queue from the closed gate all the way to the back of the compound. Watch it here:

The long queue was for walk-in applicants. There was also a shorter queue with only five people for those who managed to secure an online appointment.

POLO Dubai opens at 7:30am but some people said they have been waiting outside the gate as early at 10pm the previous night just to get served early.

They said they were left with no choice but to take a chance as a walk-in customer after they couldn’t access the online appointment system.

Others were on their second visit after being turned away on their first visit for failing to make the cut off. The office is implementing Covid-19 protocols that affect the number of customers it can accommodate.

250 appointment slots per day for contract verification at POLO Dubai

According to POLO Dubai, the surge in requests for contract verification and OEC issuance was due to increased travel opportunities during Ramadan. The office recorded a daily average of 700 OFW customers for these services from March to April.

“Most of them went home during Ramadan because of cheaper air fare compared with the December 2021 to January 2022 rates. Some of those who went home were emergency cases,” according to POLO Dubai.

The influx of people seeking POLO Dubai’s services ahead of their travel to the Philippines has caused a service traffic. ALSO READ: How to apply for OEC

“I’ve been in Dubai for 20 years and this is the first time I came here at 1am and see this horrific queue,” a Filipina (name withheld) told Expatmedia.net. “It’s very hard. We don’t have enough sleep. We have work also,” she added.

Many have resorted to camping outside the building, bringing sleeping mats, folding chairs, food and water. They use the toilet at a nearby mosque when nature calls.

“Without a proper online appointment system, you can never tell if you will be allowed in. This is my third time to come here. I took a day off two days ago. Yesterday, I was absent from work. Now I am absent from work again. But I have to do it because I am flying home the next day. I would rather lose my salary, at least I can go home,” another Filipina told Expatmedia.net.

A Filipino in the queue said he decided to arrive at the venue at 1am on Friday. “I was here last Wednesday. When I arrived at 7:30am, the queue was already all the way to the back. So I decided to come early now so I can be ahead of everyone else,” he told Expatmedia.net.

“It’s a very bad experience for us to stay here the whole night, without sleep just to be ahead of the queue,” another Filipina said.

They echoed similar sentiments shared by other Filipinos who have taken to social media to air their frustration about the long queue at POLO Dubai. Others have reported spending at least eight hours, mostly waiting in line, before they could finally have their work contract verified, or get an OEC.

Affected Filipinos have called on POLO Dubai and the Philippine Consulate for remedial action, saying that it is a “disservice” to Filipinos forced to wait in unbearable temperatures.

“Temperatures are now hitting 40°C or more. Imagine that while you are waiting outside in the sun,” said a Filipina nurse who has been living in the UAE in the last 17 years.

She admits to being one of the early birds, arriving at the venue at 10pm on Thursday so she could be the fourth person in the queue on Friday morning. “You need to be early otherwise you will end up as more or less the 400th person in line,” she said.

Meanwhile, POLO Dubai urged OFWs to “process their documents before their travel date” or have their OEC issued in the Philippines. PIA/MFDS/Expat Media