US Navy destroyer collides with Philippine container ship off Japan 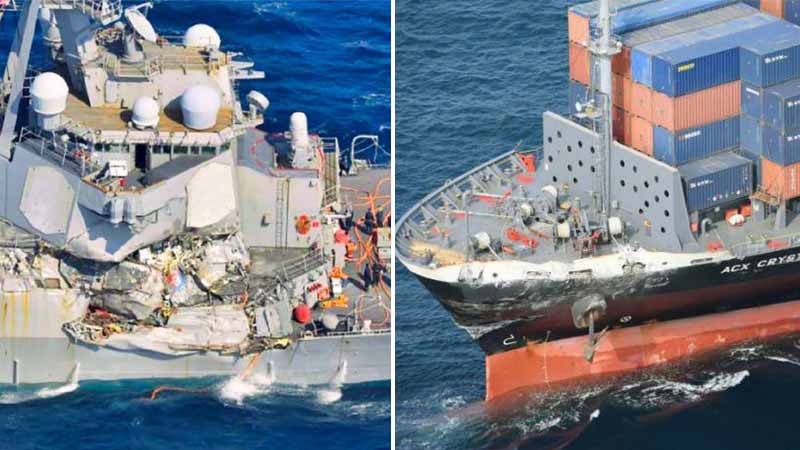 The USS Fitzgerald has been damaged in a collision with a Philippine container ship off Japan.

7 sailors of USS Fitzgerald are unaccounted for, according to Japanese coast guard official

TOKYO – A US Navy destroyer collided with a Philippine-registered container ship off Yokosuka, Japan before dawn today (Saturday), the US Navy reported.

Seven crew members of the USS Fitzgerald are missing while one sailor was hurt as a result of the accident.

A US Navy official said the USS Fitzgerald sustained damage to the mid-right side and below the waterline, causing seawater to flood three compartments of the vessel but it is not in danger of sinking as the crew is working on stabilizing the ship by pumping water out of the hold.

The Navy ship will be towed to the port of Yokosuka, it was learned.

On the other hand, the 222.6-meter container ship, ACX Crystal, suffered scratches on the left side of its bow but no one among its crew were hurt, according to Japanese TV network NHK.

The Japanese Coast Guard received assistance and emergency calls from both the USS Fitzgerald and ACX Crystal after the collision, which happened 56 nautical miles southwest of Yokosuka at 2:20 a.m.

Japanese Coast Guard official Takeshi Aikawa was quoted by Associated Press as saying that seven US Navy men are missing while one had a head injury.

NHK showed a person on a stretcher being airlifted to a chopper.

The Japanese Coast Guard went to the collision site while US tugboats, Navy assets and aircraft were on their way to assist the the USS Fitzgerald, which is an Arleigh Burke-class guided-missile destroyer with a crew of about 330 sailors.

The Navy ship underwent US$21 million in upgrade and repairs last February and is currently deployed to Yokosuka, Japan to support security operations in the Indo and Asia-Pacific regions, the Navy said.

Meanwhile, a US government official told CNN that the White House is closely monitoring the situation. GAC/Expat Media