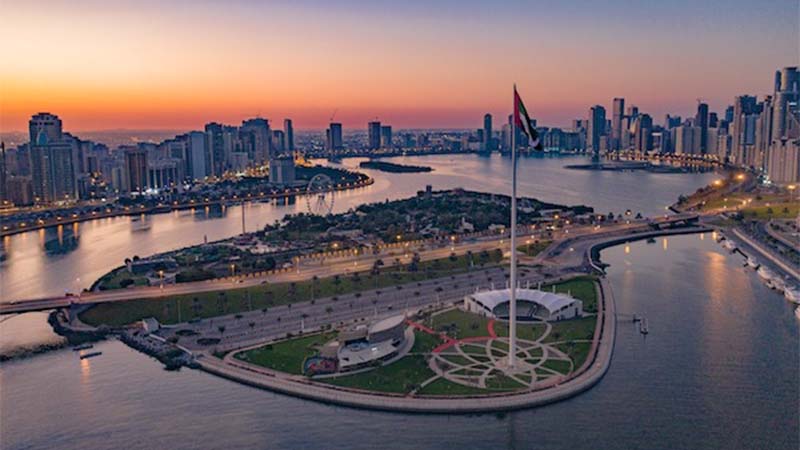 The Flag Island in Sharjah, UAE.

Events will take place across Sharjah from November 24 to December 3 as part of UAE National Day celebrations in the emirate, according to the Sharjah National Day Celebrations Committee.

Here’s what you should know:

Where in Sharjah will the UAE National Day events take place?

An opening ceremony will be held at Sharjah National Park on November 24. Celebrations will include a musical performance about Sharjah’s ruler Sheikh Dr. Sultan bin Mohammad Al Qasimi, Supreme Council Member and Ruler of Sharjah.

Mleiha Public Park will be adorned with a national march led by military music, a military band, competitions and various games, prizes, and raffles. Several segments will be performed with the participation of educational institutions.

Dibba Al-Hisn will hold national day celebrations on November 25. Don’t miss the popular march at 4pm from the entrance to the city of Dibba Al-Hisn to Al-Hisn island canal. The celebration will include folk songs, operettas, national songs and dances, and competitions until 9pm.

Kalba will celebrate on UAE National Day on November 27 from 8am to 8pm.

Kalba Corniche will host a variety of shows and activities.

Al Bataeh will host celebrations from November 28 to 30 in parks and residential areas, including a popular march by government departments and agencies, residents of Al Bataeh, schools, the Sharjah Scouts Commission, and the military band with the participation of folk groups, horse shows, classic cars, and tourist buses.

From November 29 to 30, Sharjah’s celebrations will move to Al Madam, where people will enjoy performances from police and military bands, an art exhibition, the signing of the allegiance charter, and a narrator segment. The evening segments will include a poetry evening, children’s activities, and popular dishes from productive families, in addition to a Yowlah competition, and several workshops.

There will be daily activities at Sharjah National Park from 4:30pm to 8pm from November 29 to December 3. Other attractions include a snow village, snow sculpting of national landmarks, and a model of Sharjah landmarks, among others.

Celebrations in Wadi Al Helo will include a national march, musical performances at Kalba operetta, and Al Fursan air show, in addition to sports events and competitions sponsored by Sharjah Marine Sports Club. Wadi Al Helo celebrations will take place at the Heritage Village from 4pm to 8pm.

Hamriyah Creek and the Heritage Village in Hamriyah will host special celebrations, including national songs by students of Al Qalaa School for Basic and Secondary Education and traditional songs by folk groups. This will be followed by the Hamriyah Sports and Cultural Club national competition, a competition for children, a heritage exhibition, local families products in cooperation with the people of the Hamriyah region, the Bedouin environment exhibition, and the classic car exhibition in cooperation with the Sharjah Classic Car Club.

Al Dhaid City celebrations will be held at Al Dhaid Fort. On the first day, morning activities will run from 8am to 11am, and from 4pm to 10pm for evening activities from December 1 to 3. Celebrations in Al Dhaid include the national march, camel racing, traditional performances, and other cultural events.

In Khorfakkan’s Souq Sharq, there will be a traditional shows and a classical cars show on December 2.

In Khorfakkan Amphitheater, a musical evening will featurw Eida Al Menhali and Diana Haddad. The celebrations in Khorfakkan will also include a national operetta, and poetic and artistic performances. Bands from Oman, Saudi Arabia and Kuwait will participate in UAE celebrations, demonstrating the strong ties between the people of Gulf states.

The Khorfakkan Amphitheater will host Eida Al Menhali and Diana Haddad on December 3. Proceeds will go to charity. ICA/Expat Media