Sara Duterte sworn in as Philippine Vice President: I am not the best or brightest but no one can defeat my courage as a Filipino 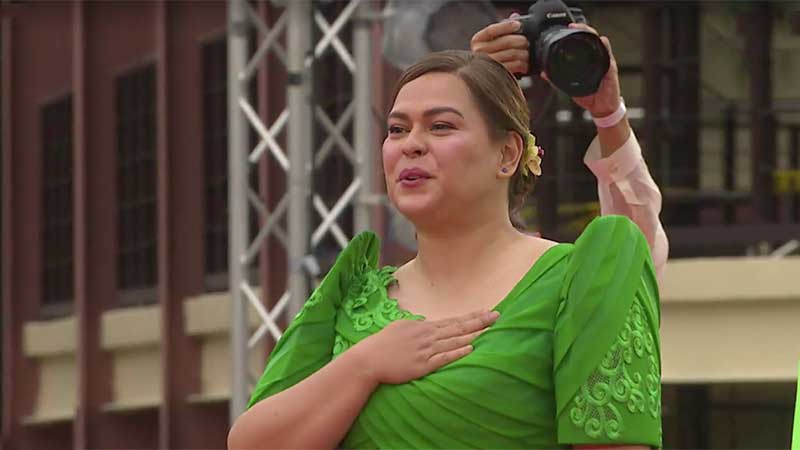 Sara Duterte takes her oath of office as Vice President of the Philippines on June 19, 2022 in Davao City, Philippines.

Sara Duterte took her oath of office on Sunday (June 19) as the 15th Vice President of the Philippines after winning by a landslide in the May national elections.

“Hindi ako ang pinakamakagaling o pinakamatalinong tao sa Pilipinas o sa buong mundo, but walang makakatalo sa tibay ng puso ko bilang isang Pilipino (I am not the best or brightest person in the Philippines or the world, but no one can defeat my courage as a Filipino),” Duterte said in her closing speech. Watch the live coverage here:

This was the first inauguration of a vice president in Davao City. Duterte will assume her post at noon on June 30.

Duterte’s inclusive speech mixed Filipino, Bisaya and English, beginning with the Muslim greeting “assalamualaikum” for the foreign guests in attendance.

“One of the most important lessons I learned as I navigate life, and the same thing that I believe we should ponder upon as one country united in our determination to overcome our difficulties and achieve our aspirations, is that we should commit to hear the priorities of God, country and family,” Duterte said.

“My life is a testament to the power of a God whom we know by many names. My younger self was consumed by a dream to become a doctor. I pursued a pathway that I thought could help me realize that dream, but I was directed toward another way. And now I am a lawyer,” she continued.

“When I committed myself to governance and public service, I was also determined to finish three consecutive terms as mayor. That will not happen anymore. I am now the vice president elect,” she said to the cheers of the crowd.

“The voice of 32.2 million Filipinos was loud and clear with the message to serve our motherland. And this message has been reiterated in my own to consecrate myself to the service of the nation,” Duterte said.

The Philippine Vice President-elect called on Filipinos to “help our fellowmen overcome the difficulties they face in their lives; to change lives”.

She praised farmers, soldiers, entrepreneurs, school teachers and health workers for their invaluable service. “I believe the country will be heading towards a future of hope, security, strength and progress,” she said. “Let us show our love to our country by taking care of our families and our communities.”

Duterte warned that the “days ahead will be full of challenges that will call for us to be more united as a nation”. “But let me reiterate this: we can never go wrong if we are a people dedicated to honoring the will of God, to serving our country and our fellowmen and protecting the integrity of our families and the future of our children,” she said. ICA/Expat Media