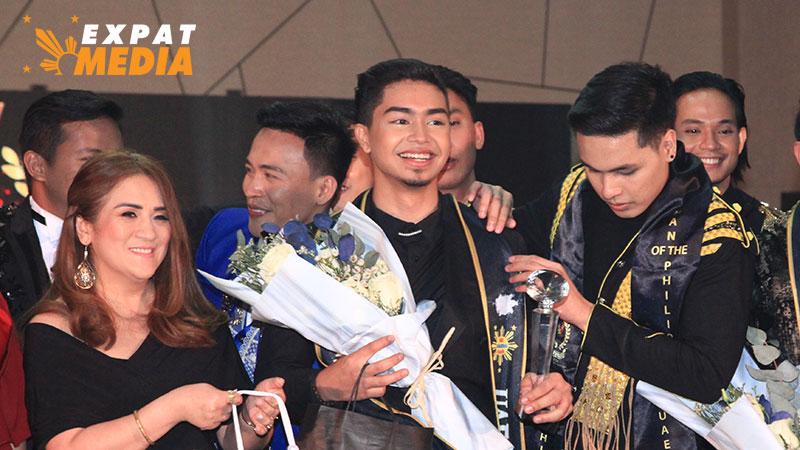 DUBAI – Second time’s a charm for new Man of the Philippines-UAE Ramzy Hesham Villegas, who bested 14 other candidates to win the top title at the Dubai pageant on Friday (September 10).

“I have big shoes to fill. I will make sure to be the ambassador of good will, and doing things for the greater good,” Villegas said in a statement on Sunday (September 12).

Villegas succeeded Bryan Rudolph Samson, the 2019 title holder and “longest reigning Man of the Philippines-UAE” after events, including the pageant, were cancelled last year due to the pandemic.

The 21-year-old Villegas made a powerful comeback to bring home the title Man of the Philippines-UAE this time, after having failed to win in 2019. His perseverance and hard work finally paid off.

The biggest advice that powered him through the competition? “Wear the clothes, but don’t let the clothes wear you,” he revealed.

The young and charming Villegas, a fourth year student of graphic design and multimedia at University of Sharjah, said he is “still in shock” after winning the crown.

“It feels ethereal, I feel ecstatic, and feelings I am not able to describe in words. All of our hard work and efforts paid off, and it showed in the result,” he said, thanking his family, friends and supporters.

“We went through hardships, but it was all worth it in the end,” he told Expatmedia.net.

Villegas showed character, confidence and style throughout the pageant segments; strutting on stage in his Sparta warrior-inspired swimwear by Calivo Couture, and a Dex Mangalindan summer wear that showed his boyish charms. Villegas also carried off his all-black formal wear with grace, and entertained the crowd by rolling in with his Man of Malabon cart in the creative costume segment. In the Q&A segment, Villegas was rhetorical when he answered judge Khel Recuenceo’s question on why male pageantry don’t seem to have “the same interest and hype compared to female pageants”.

“I think when we think of male pageants, we just think of it as something like the way we look… But it is much more than that. All of us here has a goal to achieve. We want to show something to the world. I believe each one of us carries the three aspects: nationalism, advocacy and all that. But ladies and gentlemen, we are here to fight for our reason and to fight until the very end because we are here to show you what it means to be Man of the Philippines,” he said.

As the new Man of the Philippines-UAE, Villegas said he will be working on helping people during his reign. “I want to help a lot of people, I want to be an example of that, so I can create a butterfly effect, where people will help each other. Because when you help somebody, you help everybody”.

Villegas also shared the stage with Man of the Philippines-Dubai 2021 Mark Paul Buendia; Ahmed Romero, first runner-up; Ian Dela Pena, second runner-up and Mark Anthony Papa, third runner up. Both Villegas and Buendia will represent the UAE when they compete in the Man of the Philippines nationals in Manila in November. PIA/Expat Media