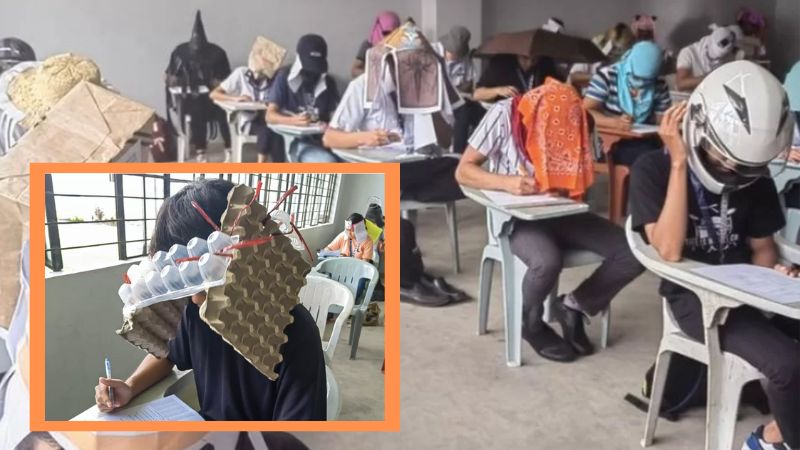 Images of students wearing “anti-cheating hats” for college examinations have gone viral on social media in the Philippines, sparking amusement among netizens.

Students at one college in Legazpi City were asked to wear hats to prevent them from peeping at the papers of their seatmates.

Many made contraptions from cardboard, egg cartons, and other recycled items.

Their teacher said she was looking for a “fun way” to ensure “integrity and honesty” in her classes.

It was used for recent mid-term exams taken by hundreds of students at the college during the third week of October.

The professor stated that she initially asked her students to create a “simple” design out of paper.

She was inspired by a technique that was used in Thailand several years ago.

Prof Mandane-Ortiz said her engineers-in-training took the idea and ran with it – in some cases innovating complex headgear in “just five minutes” with any junk they found lying around.

Others creatively donned hats, helmets, or Halloween masks to comply with the requirement.

A series of the professor’s Facebook posts, which showed the students wearing their extravagant creations, received thousands of likes in a matter of days.

The initiative is also said to have motivated schools and institutions around the country to encourage their students to create anti-cheating headwear.

Prof Mandane-Ortiz stated that her tutees performed better this year because the strict examination conditions drove them to study more.

She went on to say that several of them finished their tests early and that no one was caught cheating this year. BKM/ Expat Media