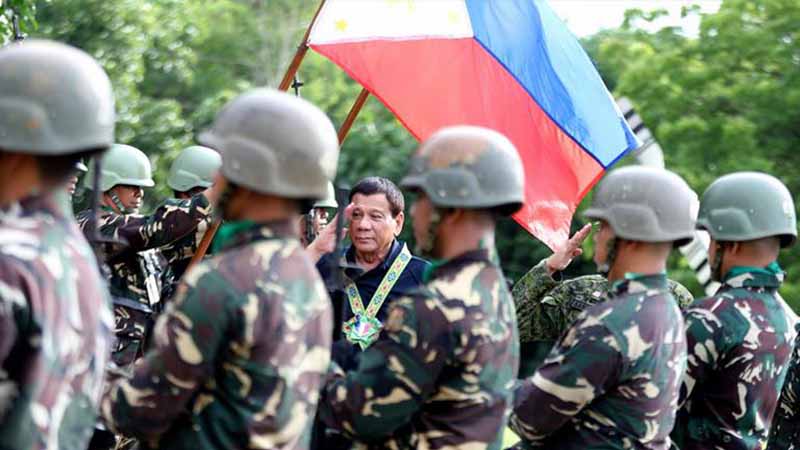 Philippine President Rodrigo Duterte salutes the troops of the 602nd Brigade, 6th Infantry Division (6ID) of the Philippine Army at the Camp Lucero in Carmen, North Cotabato on June 6, 2017.

This as President Rodrigo Duterte rejected a call by Marawi’s religious and political leaders for the government to negotiate with the members of the Maute and Abu Sayyaf groups who overran the central Mindanao city on May 23 to convert it into an Islamic State (IS) stronghold.

The additional troopers were from the Philippine Army’s 82nd Infantry Battalion based in Capiz province in the Visayas region.

According to reports, 327 people composed of 242 terrorists, 59 soldiers and 26 civilians have been killed in the ongoing fighting between the attackers and the military.

Duterte said he will avenge the deaths of the soldiers and civilians, adding that while he understands that the Maranao leaders want an end to the crisis, bringing the terrorists to the negotiating table is already too late as the gunmen are determined to fight it out with the military.

“If they go to the Maute to talk, talk about what? Surrender? Settlement? Just like that? I will not (negotiate). How about my soldiers who have died? How about (the terrorists’) murderous rampage?” Duterte said.

The President however said he will not stop the Maranao leaders from talking to the terrorists.

Meanwhile, Duterte said he will keep the Martial Law state in Mindanao until he is satisfied with results of the military operations. Duterte had placed Mindanao under Martial Law for 60 days starting May 24 after the siege of Marawi. GAC/Expat Media