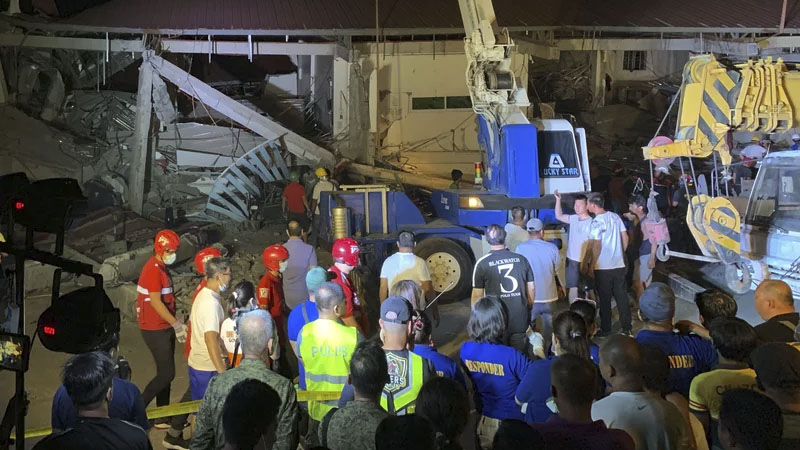 Rescuers work to free survivors trapped in a collapsed supermarket in Porac, Pampanga.

PAMPANGA, PHILIPPINES – Rescuers were working to save several people trapped in a collapsed supermarket as a state of calamity was declared in the town of Porac in Pampanga, Philippines on Monday after a powerful earthquake hit parts of Luzon, killing at least nine people.

The epicenter of the magnitude 6.1 earthquake was located northeast of Zambales, according to the Philippine Institute of Volcanology and Seismology.

A number of people were reportedly trapped under rubble in the town of Porac, which also saw seven fatalities as the earthquake toppled buildings and destroyed roads. In Lubao town, at least two people were killed.

Porac Mayor Carling dela Cruz pleaded for bigger machinery to aid in the rescue of those trapped in the collapsed supermarket. Dela Cruz said that rescuers were able to talk to those trapped and are racing against time to save them.

At least four people were killed in the collapsed four-storey building that houses the Chuzon Supermarket, according to Porac rescue officer Omar Tolentino.

Meanwhile, the Philippine Institute of Volcanology and Seismology issued a statement that dismissed rumours saying that a magnitude 7.1 earthquake may hit Metro Manila soon.

Sustaining damage from the strong quake, the Consuelo Bridge in Floridablanca town has been temporarily closed, according to the Pampanga Provincial Disaster Risk Reduction and Management.

McArthur Highway in Barangay Bodega was also temporarily closed after the boundary arch separating Pampanga and Bataan collapsed. The road is now open to traffic.

The strong quake destroyed roads in Luzon, causing big cracks on the road at the Porac portion of the Subic-Clark-Tarlac Expressway.

Old churches in this province were also not spared, with portions of the St. Augustine Parish Church in Lubao town and the St. Catherine Church in Porac town damaged by the quake.

The railway service in Metro Manila was suspended following the quake. Teams have been sent to assess all facilities and systems for the effects of the earthquake.

“Upon NDRRMC’s advice at around 5:42 p.m. to not resume operations, instructions were relayed to LRT-1, LRT-2, and MRT-3 not to resume operations until further notice,” said DOTr Assistant Secretary for Communications Goddess Hope Libiran.