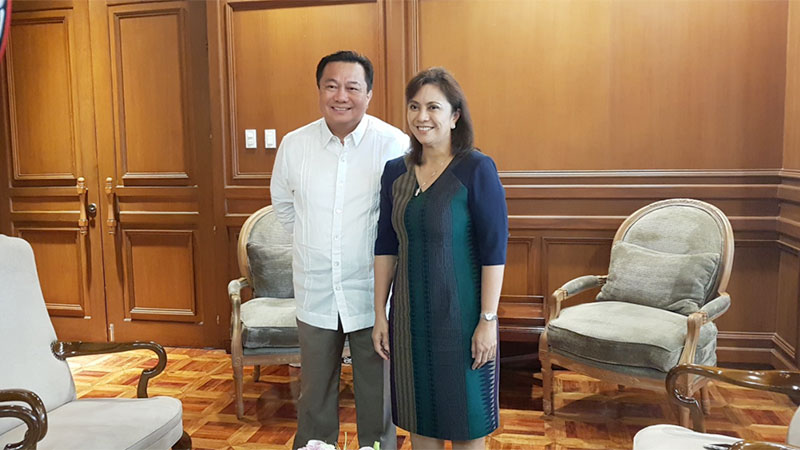 MANILA – House Speaker Pantaleon Alvarez yesterday said he is looking into filing an impeachment case against Vice President Maria Leonor “Leni” Robredo for betrayal of public trust when she sent a video message to a UN body denouncing the anti-drug war of the administration.

Alvarez made the statement after he also linked Robredo to the filing of the impeachment case against President Rodrigo Duterte by Magdalo party-list Congressman Gary Alejano last Thursday.

Alvarez said he will study the filing of the impeachment case against Robredo and consult his legal team about it also.

Robredo’s spokeswoman Georgina Hernandez told CNN Philippines that there is no legal basis to impeach Robredo.

Hernandez also said it was irresponsible for Alvarez to say he will file an impeachment case against Robredo without studying the matter.

Robredo earlier sent a video message to the UN Commission on Narcotic Drugs that held its annual conference in Geneva wherein she lambasted the anti-drug campaign of the Duterte administration that has resulted in the deaths of more than 8,000 drug suspects in police operations under Oplan Tokhang (Double Barrel) or by vigilantes.

Alvarez said by sending the video message, Robredo might have betrayed public trust, which is one of the grounds to impeach an elected Philippine official.


He also said Robredo destroyed the image of the country before the international community.

Alvarez said it is clear to him that Robredo was behind the filing of the impeachment case against Duterte.

Congressman Alejano had accused Duterte of involvement in the deaths of the drug suspects in the administration’s war on drugs, allegedly amassing 2.2 billion pesos in unexplained wealth, and for other high crimes.

While the move to impeach Duterte is doomed to fail at the House of Representatives since most of the congressmen are allies of Duterte, an impeachment case against Robredo might just get enough votes for it to be endorsed to the Senate.

Hernandez, meanwhile, said the video message cannot be considered as betrayal of public trust. “We do not consider it and it should not be considered as betrayal of public trust primarily because the Vice President simply stated facts that were relayed to her by Filipinos, by urban poor families seeking refuge (and) looking for people from government who could guide them on how to go about perhaps moving forward, coming from the experience of extrajudicial killings,” Hernandez said in the TV interview. GAC/Expat Media