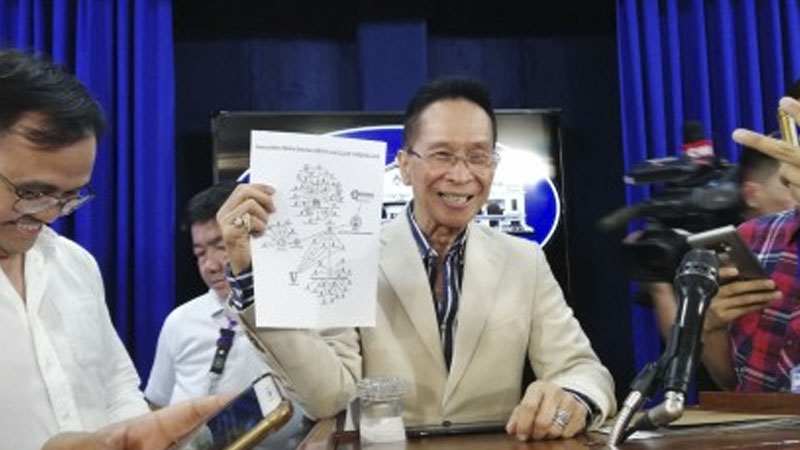 MANILA – The Philippine government on Monday revealed a matrix showing the names of journalists and media organisations involved in an alleged plot to discredit Philippine President Rodrigo Duterte.

Last week, Duterte said intelligence reports have been fed to him from “foreign” sources about the alleged coordinated media plot.

Presidential Spokesperson Salvador Panelo said on Monday that Duterte ordered him to release the matrix in a press conference to let the alleged perpetrators “know that we know”.

Among the names mentioned in the matrix are members of the National Union of People’s Lawyers (NUPL), the Philippine Center for Investigative Journalism (PCIJ), and Rappler.

Panelo said that Duterte has basis to release the matrix, adding that it underwent “proper validation.”

He described Duterte’s source as “intelligence information-sharing”, adding that it was important to release the information as it is the government’s “constitutional duty to inform the public of what’s happening”.

“If there is an ouster plan then people should know about it. People have the right to know what’s happening in this government and that includes people who want to destroy this government,” Panelo said.

According to Panelo, the matrix worked in such a way that a certain “Bikoy” would provide anti-Duterte stories to Vera Files President Ellen Tordesillas, who then distributed stories to the NUPL, PCIJ, and Rappler to write about.

Panelo said the purpose of releasing the matrix is just to “expose” the ouster plot, but that at the moment the government has no plans of filing any charges against the journalists and media organisations involved.

However, he said that “overt acts to bring down the government” made by these journalists and media organizations might force the government to consider the filing of charges.

“The counter-propaganda is the achievements done by this administration and the result as you have seen is the very high satisfactory and trust rating of the President. Survey after survey,” Panelo said. GAD/Expat Media