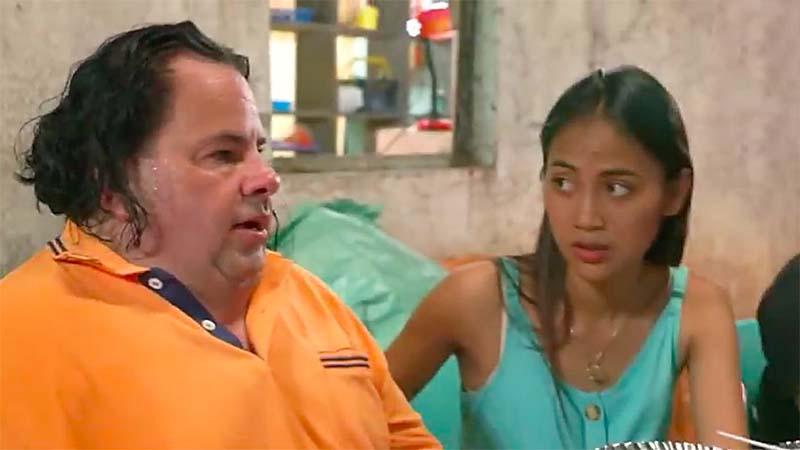 DUBAI – If you haven’t watched the 90 Day Fiance on TLC, be warned: it’s the most awkward reality show you’re ever going to watch.

It follows the unlikely relationship of  California resident Ed Brown, 54, and Rosemarie Vega, 24, from the Philippines.

Viewers have slammed Ed for a multitude of things, including his lack of neck and the fact that he’s dating someone almost half his age.

Why does Ed look the way he looks? Big Ed says he was “body-shamed” in high school where children used to call him “No Neck Ed”. He actually suffers from Klippel Feil Syndrome, a congenital disorder where the vertebrae in his neck are fused together.

There are no sparks and there’s definitely zero chemistry between Ed and Rose, which makes you wonder if she’s just using him as her money ticket and if he’s just a dirty old man looking for a trophy wife.

As the show gears up for its finale, it appears that the controversial couple are no longer together after some shocking moments were aired in the April 26 episode.

Rose, a single mother, appeared to have called it quits after Ed, who has a 29-year-old daughter, said he did not want anymore children and would like to get a vasectomy.

Rose also lashed out at him for asking her to get an STD test and for embarrassing her about her breath, which she said is because of stomach ulcers.

“I’m disappointed because you always embarrassed me,” Rose added, before she declared, “I think [you] don’t love me. I’m done.”

Ed had flown from California to Rose’s hometown in Caloocan City in the Philippines to be closer to Rose and meet her four-year-old son and family.

Her living conditions appeared to have given Ed a culture shock.

The first thing he says once inside the Vega’s shanty? “Where are the windows?” Ed also complained about the home having no door, and for sleeping on a thin mattress on the floor while the roof leaked. He is later forced to shower together with Rose’s father, saying it is “one of the weirdest things” to happen to him.

He later asked Rose to spend time with him alone in a hotel where he asked her if she could shave her legs. Rose gives her a grimace and tells him she will do it if he will shave his beard.

Things seemed to take a turn for the worse when he told Rose that her sister asked him for money. When that episode aired, Rose took to Instagram to accuse Ed of making up stories. “People, don’t believe him. He doesn’t really care about me. He just wants to be famous, that’s why he’s doing that,” she said.

She also denied that Ed showered her with gifts. “He did not even give me any gifts except bra and panties. All the words out of his mouth are lies. It’s not at all true,” she continued. “He did not care about me, especially my son.”

In a video chat with entertainment network ET on Thursday, Ed wouldn’t comment further on the current status of their relationship, except that “I’m happy, that’s all I can tell you.”

He also would not comment if rumours were true that Rose is now engaged to another woman, telling ET that people love to create fake news. PIA/Expat Media