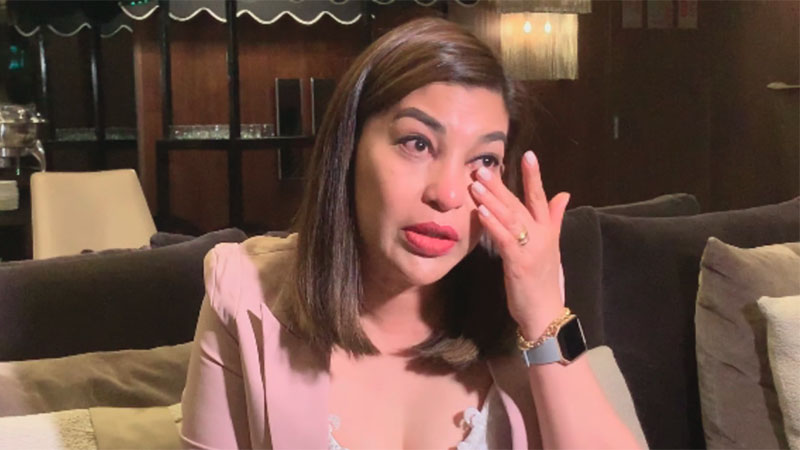 Asia's Nightingale Lani Misalucha cries during an interview in Dubai.

DUBAI – In Dubai recently for a concert dedicated to Overseas Filipino Workers (OFWs), seasoned singer Lani Misalucha couldn’t help but shed tears when Expatmedia.net asked her about the OFW who made a big impact on her life.

“My husband,” Misalucha answered, sharing her experience on what she described as one of the “most difficult times” of her life.

The 50-year-old singer was in Dubai on July 5 for a concert with Martin Nievera at the Dubai World Trade Center. The event was produced by the Philippine National Police’s Global PCR (Police Community Relations).

In an exclusive interview with Expatmedia.net at Pullman Dubai Creek City Centre, Misalucha shared that 28 years ago, her husband left their small family to work in Jeddah, at the time of the Gulf War. He was an engineer in the Saudi city.

“We were a young couple then,” she recalled, adding that their first daughter was only three months old when her husband had to work abroad. She now has two daughters and three grandchildren.

“Just imagine. We were newlyweds and we have this tiny daughter. It was difficult. It was no joke,” she said, tears starting to well up in eyes.

Misalucha said that being a wife and mother changed her. “I didn’t want to sing anymore,” she said, adding that taking care of her daughter became a priority.

She longed for her husband, with the uncertainty of the war making her even more terrified of their future.

“It wasn’t easy. You will never be able to predict or to at least foretell what is going to happen to you,” she said.

Not hearing from her husband for long stretches of time was agony, she said. Their communication relied heavily on telegrams and “snail mail”, the only means of affordable communication at the time.

Fortunately for Misalucha, fate had better plans. “I tried and attempted to veer away from being a singer but it kept on chasing me,” she said. As her career took off and she gained a name in the industry, her husband quit his job to be by her side.

Misalucha’s stage got bigger and bigger, and she was even dubbed the “Asia’s Nightingale” by MTV Southeast Asia for her expansive vocal range.

She wouldn’t change anything if she had to live her life all over again, she said. But she does have a lesson to share.

“It’s not easy being away from your loved ones,” Misalucha said, echoing the sentiments of hundreds and thousands of OFWs and their families across the world.

What has she learned from the experience? “Families should never live apart, especially couples,” she said, adding that she hopes for government programs that will generate more jobs in the Philippines so that Filipinos will no longer have to work abroad. ICA/Expat Media