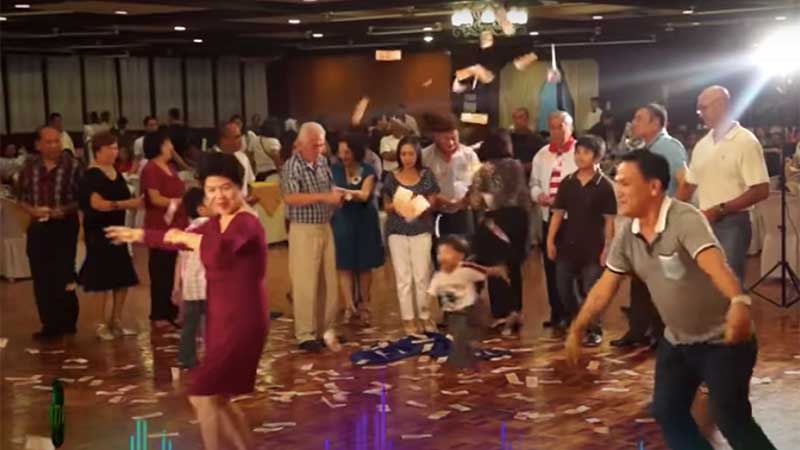 The kuratsa mayor is a traditional Waray dance in the Philippines.

DUBAI – A group of Filipinos who literally love throwing their money away stirred mixed reactions from netizens after videos of their jaw-dropping custom resurfaced on social media.

Videos of the traditional Waray dance, kuratsa mayor (also spelled as kuracha mayor), show dancers and even spectators throwing a rain of money confetti while the kuratsa music, with its distinct string instrument sound, plays on.

Netizens unaware of the traditional dance called it an “obscene” flaunting of wealth, and were quickly berated by locals to “please respect our tradition”.

In truth, there is nothing obscene about this traditional dance, explained Jerico Badocdoc, an Abu Dhabi-based physical therapist who grew up in Guiuan, Eastern Samar.

“Those who don’t know our tradition don’t understand that it isn’t about bragging about your wealth. It is a community celebration to help raise funds for good causes,” Badocdoc said.

“The money that the dance participants throw in the air is treated as a donation, and all that cash goes to the cause,” he said.

What is the kuratsa mayor?

The kuratsa mayor is an age-old courtship dance of the Waray people from the islands of Samar, Leyte and Biliran of the eastern Visayas region of the Philippines.

It is often featured in birthdays, weddings and other community events as a social dance and as a way of raising funds for various causes.

“It has been practiced for as long as anyone can remember, from the time of our forefathers until now,” said Mars De los Santos, who grew up watching the unique dance in local fiestas.

There aren’t any formal dance lessons taught in school, but the kuratsa mayor is just something the Warays have passed on from generation to generation.

The Filipina entrepreneur said the dance mimics the courtship behaviour of a rooster and hen.

“You can see the dancers gracefully waving their arms sideways while doing a combination of feet shuffling, skipping and minced steps,” said De Los Santos, a Guiuan native who runs a media, PR and events management business in Dubai.

“The dance is big when it comes to weddings in Guiuan,” she said, adding that the families of the groom and bride usually go all out in throwing money in the air.

De los Santos said the most ostentatious kuratsa mayor she saw was at a local wedding. “They literally had to shovel the piles of cash from the dance floor,” she said.

Lockdowns and restrictions in the Philippines due to coronavirus have put a stop to social gatherings, but more time online has certainly pushed more people to rediscover the videos on social media.

“I am glad that social media has opened up people to the various regional customs and traditions in the Philippines. There is so much we can learn of the things that are uniquely Filipino,” she said. PIA/Expat Media