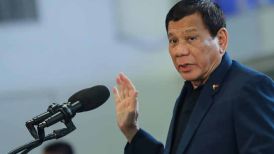 MANILA – Malacañang yesterday allayed fears over President Rodrigo Duterte’s earlier pronouncements that he will defy the Supreme Court (SC) and Congress with regard his declaration of Martial Law on Mindanao.

Duterte earlier said he will only listen to the Armed Forces of the Philippines and the Philippine National Police (PNP) in deciding if he will lift Martial Law on Mindanao or extend the duration of military rule on the island where most Filipino Muslims live.

He also said members of Congress and the Supreme Court are not the ones affected by the siege of Marawi City by members of the Maute Group, which has links to the Islamic State.

The Maute group members attacked Marawi City on Tuesday last week. The terrorists raided a hospital and set fire to a school, church and the city’s jail. They also took a priest and church workers as hostages.

The siege prompted Duterte to impose Martial Law on Mindanao for 60 days and forced him to cut short a visit in Russia.

Government forces have been engaged in clashes with the terrorists, resulting in more than 90 casualties.

The Philippine Constitution states that Martial Law can be declared on the Philippines or on any part of it for a maximum of 60 days and that any extension needs congressional approval. The country’s Charter also provides that the Supreme Court can review a Martial Law declaration should there be any petition questioning it.

Meanwhile, Abella said the President is willing to hold a dialog with Congress and the SC on Martial Law in Mindanao.