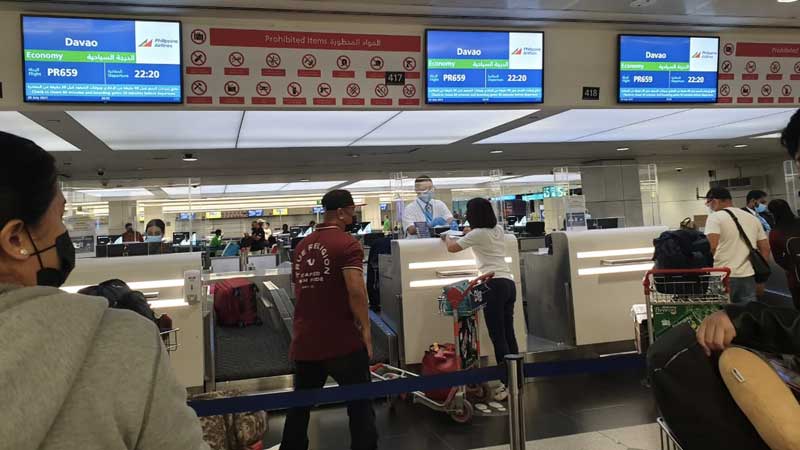 DUBAI – The first special commercial flight or Bayanihan flight from Dubai to the Philippines landed in Davao City amid a scarcity of quarantine hotels in the Philippine capital of Manila, airline sources said.

Philippine Airlines flight PR 695 arrived in Davao on Friday (July 30) after leaving Dubai on Thursday. It carried more than 300 passengers, mostly Filipinos stranded in the UAE for months.

“As soon as the plane lifted off from Dubai, many of the Filipino passengers cheered for joy. It was the same when we landed in Davao,” Michael Herrera, one of the passengers, told Expatmedia.net.

Herrera paid more than Dh4,000 for a one-way seat on the flight. The Filipino businessman said it was worth it, after being stranded in Dubai since May for what was supposed to be just a quick business trip and launch of his Tourismo travel booking app.

He said he is looking forward to spending time with his family in Manila once his 14-day quarantine period ends in Davao where he is staying in a hotel.

An airline spokesperson said the decision to land the plane in Davao was due to the city having enough quarantine hotel rooms to accommodate all arriving travelers.

Only repatriation flights and special commercial flights under the Bayanihan programme are allowed to enter the Philippines from these restricted countries.

A special commercial flight or Bayanihan flight carried 339 Filipinos on July 30, and 350 more on July 31 on a repatriation flight arranged by the Department of Foreign Affairs (DFA).

The special commercial flight was staffed by fully vaccinated pilots and cabin crew.

Two scheduled Bayanihan flights on August 4 and 7, via Philippine Airlines, are reportedly cancelled due to “lack of quarantine facilities” in the Philippine capital.

Since the beginning of the pandemic, the DFA has chartered several flights to bring home a total of 3,350 Filipinos from the UAE.

“We are mounting more flights in the coming weeks to bring home as many distressed Filipinos from the UAE as soon as possible,” said Undersecretary for Migrant Workers’ Affairs Sarah Lou Y. Arriola.

The announcement follows Secretary Teodoro Locsin Jr.’s promise to distressed overseas Filipinos for the DFA to make use of its resources to “bring them all home.” PIA/ICA/Expat Media