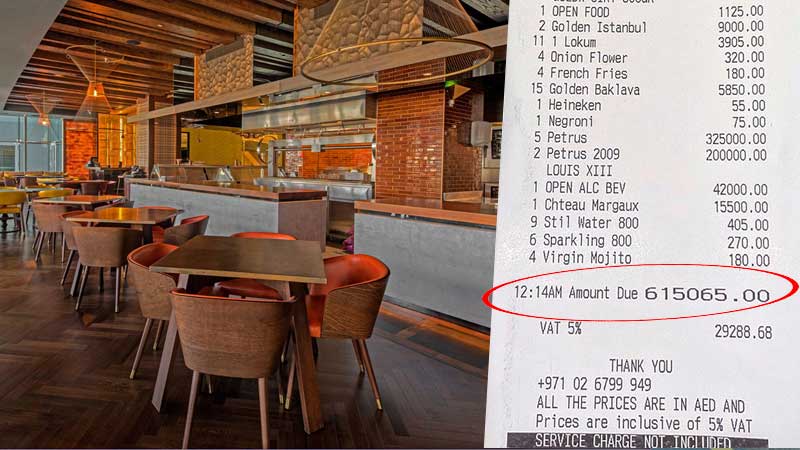 The restaurant bill from Nusr-Et Steakhouse in Abu Dhabi.

Would you pay more than half a million dirhams for dinner? That’s exactly what a group of diners did for a meal at Salt Bae’s Nusr-Et Steakhouse in Abu Dhabi.

A photo of the bill has gone viral on social media after Salt Bae, whose real name is Nusret Gokce, shared it on Instagram.

“Quality never expensive #saltbae #saltlife #salt…” Salt Bae wrote in the caption. He did not reveal the identities of the diners. Among the most expensive items on their bill were bottles of a rare French wine called Petrus, which costs Dh65,000 each or Dh325,000 for five bottles. They also ordered more bottles of expensive wine, including a Chateau Margaux for Dh15,500.

Salt Bae’s post attracted a barrage of criticism from social media users, with more than 600,000 likes and more than 27,000 comments. Many expressed shock and disgust over the bill, with many netizens calling it “insane”.

“This is lame, that amount of money will help a whole village from dying. This is horrible,” one netizen wrote.

Another user wrote: “There are about 98 million people below the poverty line, homeless, and you are spreading lies?!!! what is the purpose behind publishing such things? I will unfollow you and I hope so from everyone to do the same … shame on you.”

This is not the first time that Salt Bae has posted photos of diners’ bills from his chain of restaurants. ICA/Expat Media