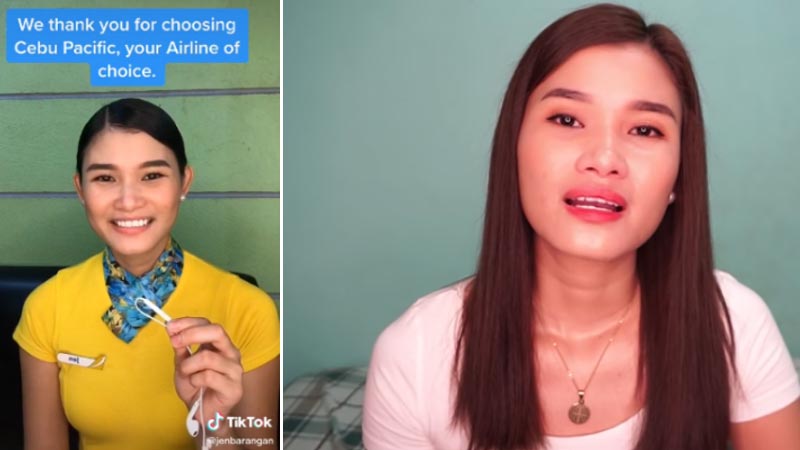 CEBU – A Filipina flight stewardess behind a viral TikTok trend has lost her job with Cebu Pacific, she revealed in a heartbreaking YouTube vlog.

“I just lost a job that I dearly love,” a teary-eyed Jen Barangan, who sparked the Flight Attendant Challenge on TikTok, announced in a recent video.

Barangan’s video has since gotten more than two million views as of Thursday (October 22). She has nearly half a million subscribers on YouTube. Watch her vlog here:

The Cebu native from Carcar town, who has worked with Cebu Pacific in the last three years, said that news of the retrenchment came in the last week of May.

The biggest blow came in June when she accidentally received an email detailing the airline’s retrenchment plan, and saw that she and her colleagues were included in the planned job cuts.

“During that time I felt like my whole world was crashing down. My body went numb. At first I couldn’t move because I was shocked,” she said.

“The file was so detailed that even names of managers included in the retrenchment were there,” she said, adding that she only spoke publicly about this now after being told by a manager to keep the information private until an announcement is made.

Barangan formally received an email about her retrenchment on September 2, saying that she would be laid off effective October 16.

“Am I scared? Definitely I am. I don’t know what lies ahead. This is something I did not plan. I did not see this coming, but I know that God has plans for me. I know he’s preparing me for something great,” Barangan said with a slight tremble in her voice.

The Filipina urged her YouTube fans to “keep on fueling your dreams and passion, and determination and hard work”.

“When this pandemic ends and we are all cleared to travel again. The skies will need you and it’s your turn to follow your dreams. A new chapter of my life is about to begin,” she said. FAY/Expat Media

Cathay Pacific to lay off 5,900 employees