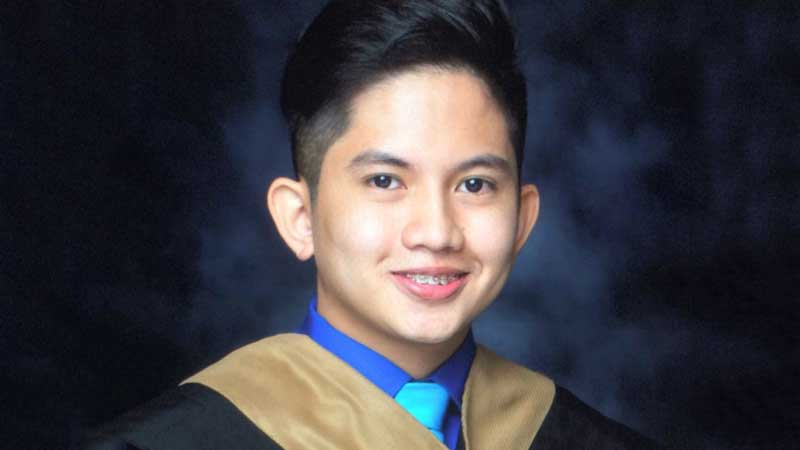 The story of how Filipino student Christian Jenoe Losa finished college is one of hope and perseverance and has gone viral on the internet.

In a Facebook post, Losa shared the difficulties he experienced while studying and is not ashamed to admit that he borrowed money from relatives, friends and even from usurers to pay for his tuition. He was able to pay them back though with the help of his father.

Losa recently graduated from Jose Rizal University in Mandaluyong City, a suburban city of Metro Manila, where he took Bachelor of Science in Hotel and Restaurant Management (HRM) Major in Cruise Management.

Losa’s mother died when he was still very young. His father is working in Saudi Arabia.

“When a crisis hit Saudi Arabia, my father failed to send money for six months so we have to borrow money and find ways to survive,” Losa recalled.

Losa said that aside from borrowing money, he would sell contemporary products to schoolmates, the proceeds of which he used to pay off his tuition or buy gadgets that he can pawn when the need arises.

In his post written in Filipino, Christian said: “My elder sister and I have to make ends meet. We borrowed money. I must not lose courage. Nothing will happen to you if you get scared or become shy.”

There were times when Losa said he had to do “menial jobs” to survive.

“I tried retailing. I sold a variety of products, especially the contemporary ones. I went to remote places to sell. I braved the heat, pollution, heavy traffic and demanding customers. Sometimes you’ll have to stretch your patience for a few cash and you must be diligent and have guts,” he said.

“Yes, I have a father who toils overseas but that does not mean we have a good life. When a crisis hit Saudi Arabia, my father failed to send money for six months so we have to borrow money and find ways to survive. Imagine, at 16 years old, I loaned from P20,000 to P30,000. I was wondering where I drew strength to overcome the odds.”

“There were times I did not go to school because I was so broke. Those moments when you wake up and start thinking so much. There were times that some of my classmates will give me money for my meals. Many times I did not take the exams because the school’s ‘No permit No Exam’ policy. During these cases, you’ll have to find someone willing to lend money so you can catch up for the exam. Sometimes, I have to leave the classroom to avoid embarrassment in case I would be asked to produce the receipt for the exam fee. You’re lucky if the professor will listen to your plea.”

“There were times when I really have nothing, but when I have money I will use it wisely. I engaged in buying and selling gadgets. I can pawn these in times of need. I bought shoes and paid in installments.”

“Today is graduation day. I’m so happy and I know Papa is happy, too, as well as my sister and mother. But it’s sad that mama is gone and I cannot share this to her. My perseverance I dedicated it to my mother. Especially to you, Pa!”

Losa has his share of bashers who doubt if his story is true but he remained unperturbed.

As of Wednesday (April 5), Losa’s Facebook post had been shared more than 70,000 times and has garnered more than 300,000 reactions. GAC/Expat Media